Noor Alam fighting video is now viral on social media platforms. MNA Noor Alam a former PTI leader and member of national assembly had a fight with a PTI worker in Islamabad Marriott Hotel. Noor Alam and Mustafa Khokhar were present in an Iftar Party with some members of Pakistani people’s party in the hotel. Nadeem Afzal Chann and Senator Faisal Kareem Kundi were also there.

Noor Alam and Mustafa Khokhar along with eighteen other members were the members of Pakistan Tehreek-e-Insaf. They left PTI and joined opposition aimed No-Confidence voting movement against Imran Khan. This made PTI workers angry, and they are calling those 20 politicians “Lota”. However, Noor Alam and other deviated ex-PTI members didn’t gave vote against Imran Khan in no-confidence movement because PDM has already got favor by MQM. 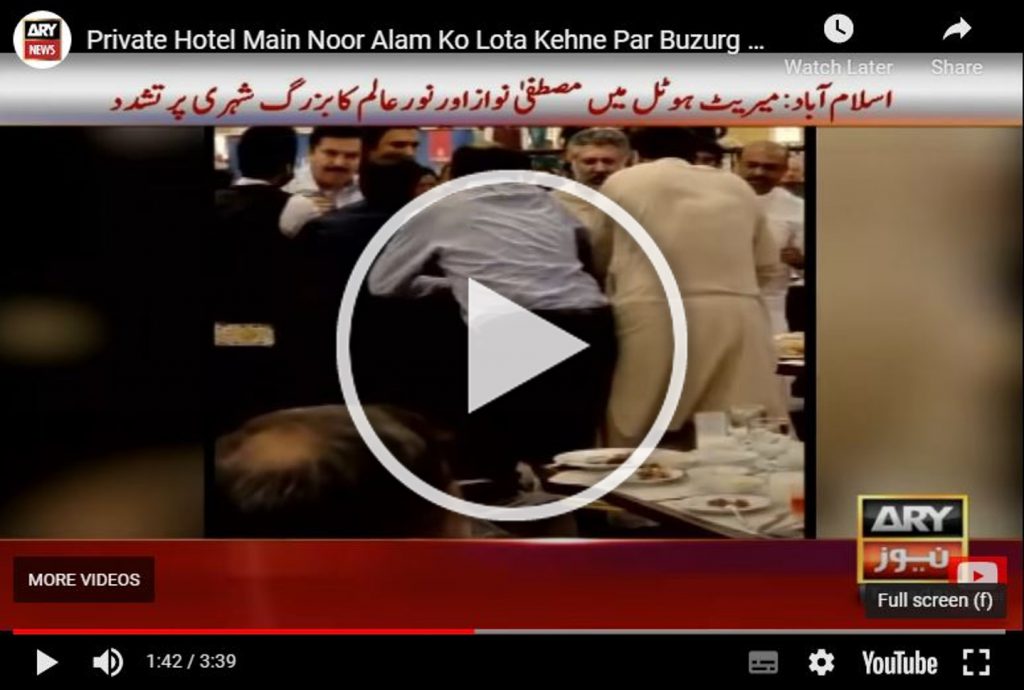 The witness of this happening told to media that the elderly saw the deviated ex-PTI members and raised his voice to call them Lota. Responding to it, politicians tried to stop elderly from abusing their name but he kept on calling them Lota. As a result, Noor Alam and Mustafa Khokar lost their cool and had a fight with the man. Witness said that he slapped the elderly and now, social media users condemning it .

After the fighting incident of Noor Alam and Mustafa Khokhar, the management of Hotel took out to elderly citizen. However, Noor Alam gave application in Secretariat Police station against that angry citizen. In the application, he wrote that he was there in the Iftar party with his friends. The elderly started abusing his name and said bad words. This is not the first incident as PTI workers have done same with him before. He further said that the elderly gave him life threat, news published by Khaleej Urdu.

In the current situation, we can see that the anger of PTI workers is keep on flaring since after Imran Khan had to left PM’s seat because of No-confidence voting. We are afraid that it might take country to instability. Prime Minster Imran khan who is in opposition now, planning to resign along with all PTI members so that they might bring country to elections as early as possible.